I hope you enjoyed our last blog where the focus was on Process Tools and the Conversational Model. This week, I am going to introduce you to the core NPCA model, on which all of our tools and models are based.  The North Point Meta-model, or as we affectionately call it the NPM, is at the core of what we stand for and teach to our students on the NPCA Certificate for Professional Coaching.

I find the best way to demonstrate the use of the NPM is through an example.

Recently I worked with a client who was having difficulty with his team, in particular he complained that his team was lazy and spent time talking about non-work issues, meaning that he was needing to constantly follow-up and often had to complete their work tasks himself.  He had recently been promoted as a result of his excellent performance on the job, but he was burning out due to the extra work he was taking on.  He found himself constantly losing his temper with others in the workplace, and his lack of patience was also becoming a real issue at home with his wife and children. 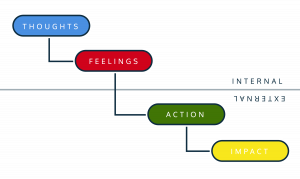 Our thoughts and feelings are part of our internal world and therefore, only we can perceive them. The NPM informs us that our thoughts are acts of attention on a belief, which then gives rise to our feelings and emotions.

When I asked him about what he was thinking, my client shared thoughts such as “I have to do this all on my own”, “my team is lazy”, “when people are at work, they shouldn’t have personal conversations.”

My client was experiencing feelings of anger, even rage at times, as a result of these thoughts, as well as anxiety about the amount of work he was doing and how he was being seen by him manager.

Once again, looking at the NPM, we can see that our feelings causes us to act which then results in the impact we have both on ourselves and others. While our thoughts and feelings are internal and only known by ourselves, our actions and impact are part of our external world and can be seen and known by anyone, which in turn forms their own thoughts and feelings - leading to their own actions and impacts.

As a result of the emotions my client was experiencing, his behaviour was to complete much of the work himself, barely communicate with his team, and much of his communication was shouting at his team - and his family - whenever they came to discuss issues.

The impact this was having was that people wouldn’t go to him with issues and he was hearing about work-related problems from his own manager and having to constantly fix those problems himself, which compounded his annoyance with people and the anxiety he was feeling. His children weren’t playing near him, and would constantly go to their mother for all their needs rather than speaking with him. This is in turn, continued the cycle of thoughts, feelings, actions and impact.

The NPM in action

Where this gets interesting, is what happens once a client becomes aware of how their thoughts and feelings are causing them to behave and the impact they are having not only on themselves and others.  My client realised that his thoughts (and the beliefs behind those thoughts) were not particularly useful in achieving his goals of improving his teams performance. This in itself is a new thought, and from this he was able to explore with me the new impact that he would like to have on both his team and his family, and experiment with new actions would help to achieve this.

Over time, my client started communicating with his team, not just on a work-level but also speaking to them on a personal, friendly level.  This was something of a revelation to him and it took some time to gain his team’s trust, as they also have their own internal world thoughts and feelings related to their own understanding of the meaning of their boss’s external world actions and impact. Once he was able to build trust with his team, my client was able to delegate work more effectively and build the skillsets of individual team members, with the impact that this reduced his own stress.  He also repaired his family relationships and would put aside work to play with his children once he got home in the evening.

The greatest impact for my client though was that his new self-awareness of his own thoughts has led to more positive emotions, and knowing that his internal world drives his external world, has enabled him to choose new actions and impacts that serve him better.

For me, although the NPM is an incredibly simple tool, it is also so powerful when we use it to help our clients gain clarity and explore each area with them. Once again, I would love to hear your comments about how you could use this tool with your own clients.

Next Wednesday is the final coaching tool we will share with you in this coaching tools series: Levels of Attention.

If you want future articles delivered to your inbox you can sign up to the NPCA Community.

North Point Coaching Academy runs a 6-month coach development programme, which is accredited by the International Coach Federation (ICF). You can read more about the NPCA Certificate in Professional Coaching on our website or contact me for more details on [email protected].

See you next week.